Fast-growing startup, Amplio Digital, goes from PivotDesk guest to PivotDesk host in a matter of months 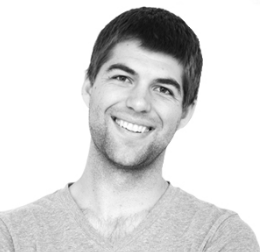 "I used Craigslist, I asked around, I walked up and down Pearl street, I did everything I could to try to find an option. Pivotdesk ended up being the easiest to work with. I would shoot an email off and say ‘hey I want this at this price’ and the legal issues weren’t something I had to worry about."

When Boulder-based advertising and marketing agency, Amplio Digital, outgrew their PivotDesk host’s space, president, Marshall Hayes, started scoping out offices in downtown Boulder to house a 12 person team. But after calculating that their growth projections put them at a 65 person company in just 3 short years, Marshall knew there was no way the 1,000 square foot office spaces he had been looking at could support that kind of growth. So, to avoid making multiple moves, he decided to go bigger and confidently signed a lease on an office 3 times larger than what they needed at the time, knowing they could monetize the empty space with PivotDesk until their team grew. Within weeks of putting their PivotDesk posting up, Amplio Digital booked 2 teams and started earning more than $1,000 monthly on their excess space!

Launched in 2014, Amplio Digital helps companies grow their online revenue through Amazon optimizations and other digital marketing strategies. In 2015, when the company was still in its early stages and not yet ready for a lease, founder Marshall Hayes booked his company — then a team of 3 — in a shared office space in Boulder, Colorado using PivotDesk. At the time, their needs were simple; they wanted something flexible and affordable. And for Marshall, being in a work environment that kept his team motivated was essential.

Though finding space on PivotDesk was easy for Marshall, the services he tried prior to using PivotDesk were a bit more frustrating, says the founder. Before searching for space on Pivotdesk, Marshall sought to find office space through every channel he could.

"I used Craigslist, I asked around, I walked up and down Pearl street, I did everything I could to try to find an option. Pivotdesk ended up being the easiest to work with. I would shoot an email off and say ‘hey I want this at this price’ and the legal issues weren’t something I had to worry about."

After communicating with some hosts on the PivotDesk platform, Marshall and his team settled in at a host company in downtown Boulder to focus on growing their business.

"It was nice for us to have more people around who were productive. It was really important to me that my team felt motivated and energized in our work environment."

Fast forward to 6 months down the road and Amplio Digital is now a 15-person company with a team of 12 in Boulder in need of an office of their own.

Shortly after Marshall started looking for space for the second time, the company did some road-mapping and realized if they continued to meet their business goals, they would be a team of 65 in just 3 years. Marshall realized that signing a long term lease for an office that fit 12 people wasn’t going to fit their long term business needs, and would result in yet another office move in less than a year. But what about their immediate business needs? Like many other businesses owners, Marshall was suddenly faced with the need for an office that was big enough to fit a team that for the most part, didn’t even exist yet.

Although the idea of taking such a large space was daunting, Marshall felt signing a lease for a space they could grow into was best for their company. Knowing he had PivotDesk in his back-pocket to help fill the office and offset costs until his team grew into such a large space, reinforced the fact that taking on their own lease was the logical next step for Amplio Digital.

"PivotDesk helped me relieve a lot of the fear associated with signing up for a bigger space — if I get in over my head, I can negate a lot of that responsibility with PivotDesk."

Marshall and the rest of the leadership team signed a lease for a 4,100 square foot office in the heart of Downtown Boulder in the winter of 2015 and posted their space on PivotDesk shortly after.

"It was surprising how easy it was — it was easier than listing my place on Airbnb."

Within just a few days of posting their space, Amplio Digital had their first tour request come through.

"We got a bunch of interest right away, one person a day and I thought,‘this is cool!’"

Within 2 weeks, they had 2 teams in their space, helping them to offset their monthly real estate costs.

"Because of the invite to tour/invite to book process the software put in place, it’s easy to get the people you want in your space."

Amplio Digital has even taken steps to customize their space for office sharing to ensure their guests have the best experience possible. They have a dedicated desk area where they can work and another area in the open workspace complete with desks and monitors that guests can book. Recalling his previous time as a PivotDesk guest and the benefits of being in an energetic work environment, Marshall has set out to recreate that now that he is a host.

"I want to invite people to become part of an entrepreneurial community, people who want to interact and feel included; help yourself to coffee, food, whatever else you need."

In addition to open desk seating, Amplio Digital has a full kitchen, snacks, beverages, and multiple conference rooms available for both the host team and their guest teams to use as needed. One of Marshall’s favorite parts of the office is the old bank vault that has been converted to a small office.

Since posting their space in March, Amplio Digital has been able to offset more than $1,000 a month of overhead costs by posting their excess space on PivotDesk. And with more inquiries coming in daily, Marshall anticipates the process of filling the office to go very well. 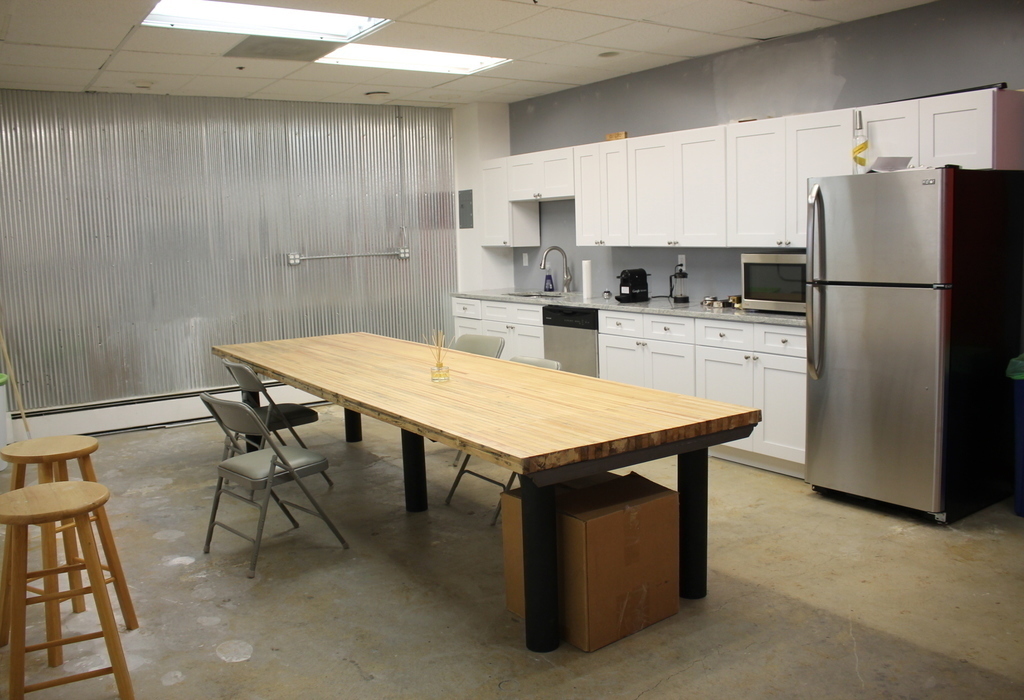 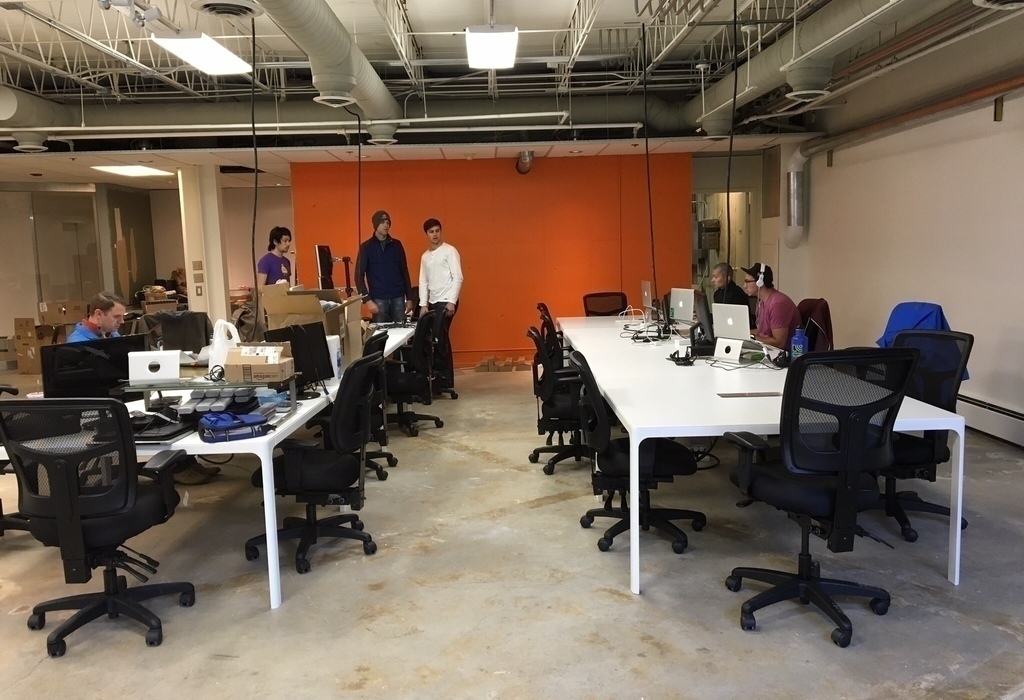 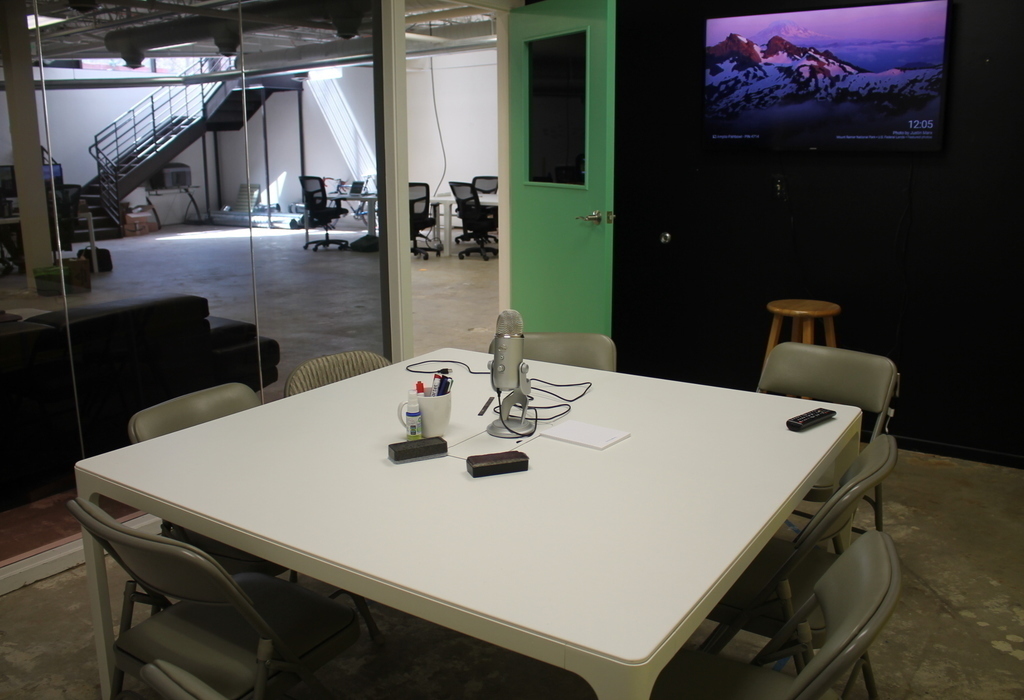